The Salvation Army UK reaches 49% donor conversion with Fundraise Up 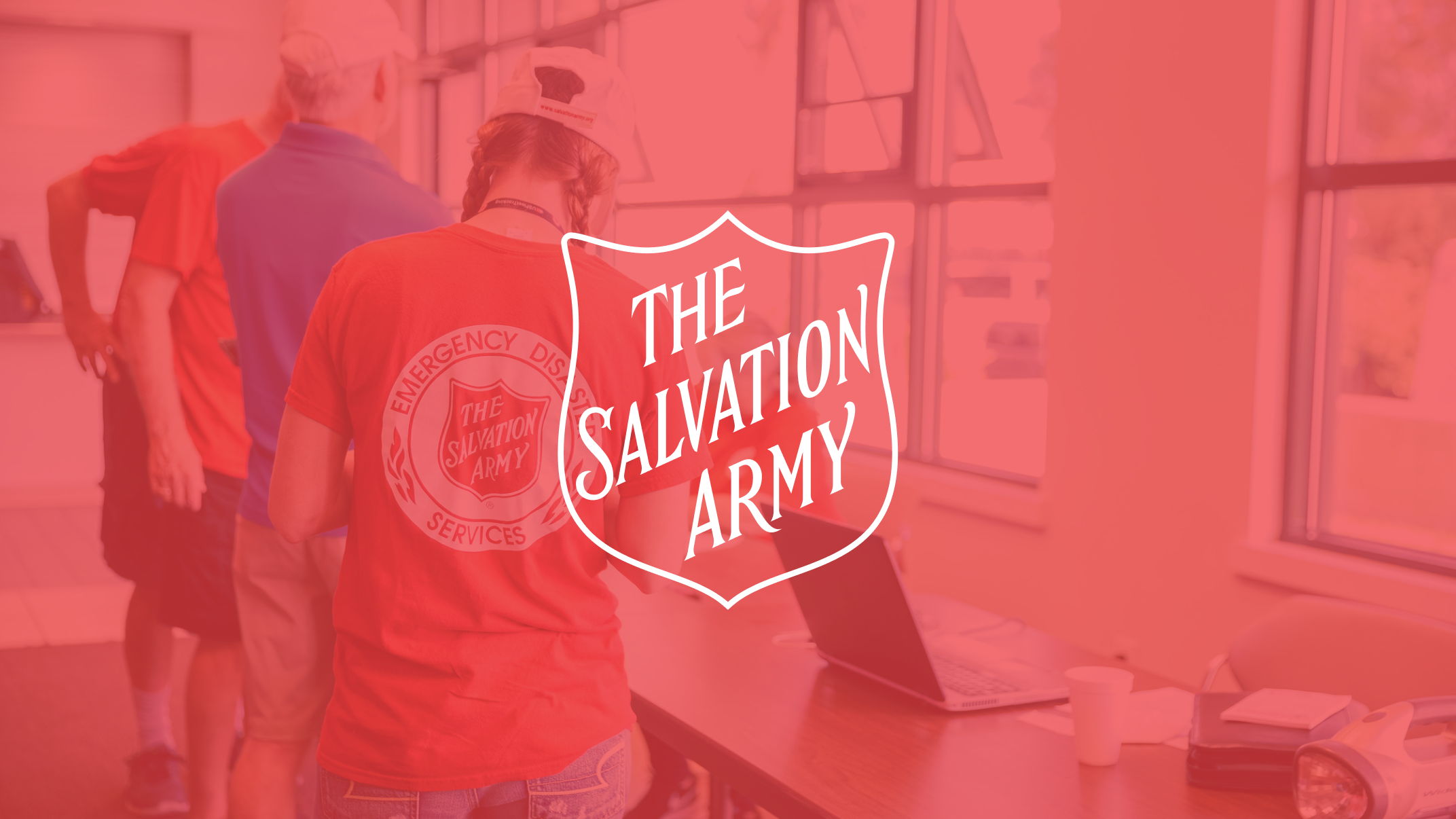 A prominent organization well-known in the charitable sector, The Salvation Army UK has been fighting against inequality and transforming lives for the last 150 years. With focus areas like homelessness, poverty, addiction, domestic abuse, and emergency services, the organization is committed to helping those who are in need of critical assistance without discrimination.

For Emily Casson, Digital Marketing and Fundraising Manager at The Salvation Army UK, working for such a renowned organization means feeling incredibly inspired by the organization’s impact and feeling like you’re really making a difference in people’s lives.

While the organization prides itself in providing essential services and resources to help those in need of support, it also acknowledges the importance of providing a positive donation experience for its valued supporters. In efforts to improve its overall user experience, The Salvation Army UK began evaluating new technology solutions in 2021 to streamline and optimize its donation process.

After an extensive search to find a technology partner that provides a better user experience, increased donor conversions, and more comprehensive and easy-to-understand data reports, The Salvation Army UK ultimately implemented Fundraise Up in October 2021. Within five short months, the organization has seen improvements in leaps and bounds in not only donor conversion but also in revenue generation and staff productivity.

Read on to learn how Fundraise Up helped The Salvation Army UK solve its biggest pain points through having:

The industry average for donor conversion falls between 15% to 17%. Of website visitors who open the donation checkout, The Salvation Army UK is converting 49% of those visitors to donors with Fundraise Up.

The difference between Fundraise Up and other donation platforms is its easy-to-use user interface and unique AI and machine learning capabilities. The technology collects more than 100 real-time data points from a website visitor to predict custom giving levels for that particular person. In fact, 70% of Salvation Army donors are using the AI-suggested amounts.

“We’ve seen a noticeable difference in new recruits with Fundraise Up — those who might not have donated on our previous platform because the donation experience wasn't as good. We're seeing a real impact and a lot of good feedback from the donors about how easy it is,” Emily said.

Fundraise Up also seamlessly integrates with Gift Aid, a tax benefit for charities in the U.K., which attributed to even more increased fundraising revenue for The Salvation Army UK.

"We saw Gift Aid adoption jump from 66% to 74.5%, which, for one of our Christmas campaigns alone, equated to an extra £27,000 just from more people clicking that button. Because of the way Gift Aid was presented to them, it was more obvious."

In February 2022, Russia began its invasion of Ukraine, triggering a humanitarian crisis. The devastating news and immediate need for life-saving support drove nonprofits to move quickly and provide humanitarian aid to the 18 million people who will become affected by the conflict. The Salvation Army UK is one of the many nonprofits pivoting to offer its support.

With the help of Fundraise Up’s customer success and support teams, in combination with a very intuitive donation platform, The Salvation Army UK was able to quickly get its Ukraine appeal up and running within minutes to provide immediate support to those who have been directly impacted by the conflict.

Emily emphasized, “For the Ukraine appeal, we set up the campaign in about 10 minutes. That speed definitely helped increase our fundraising so that we can be a lot more dynamic.” 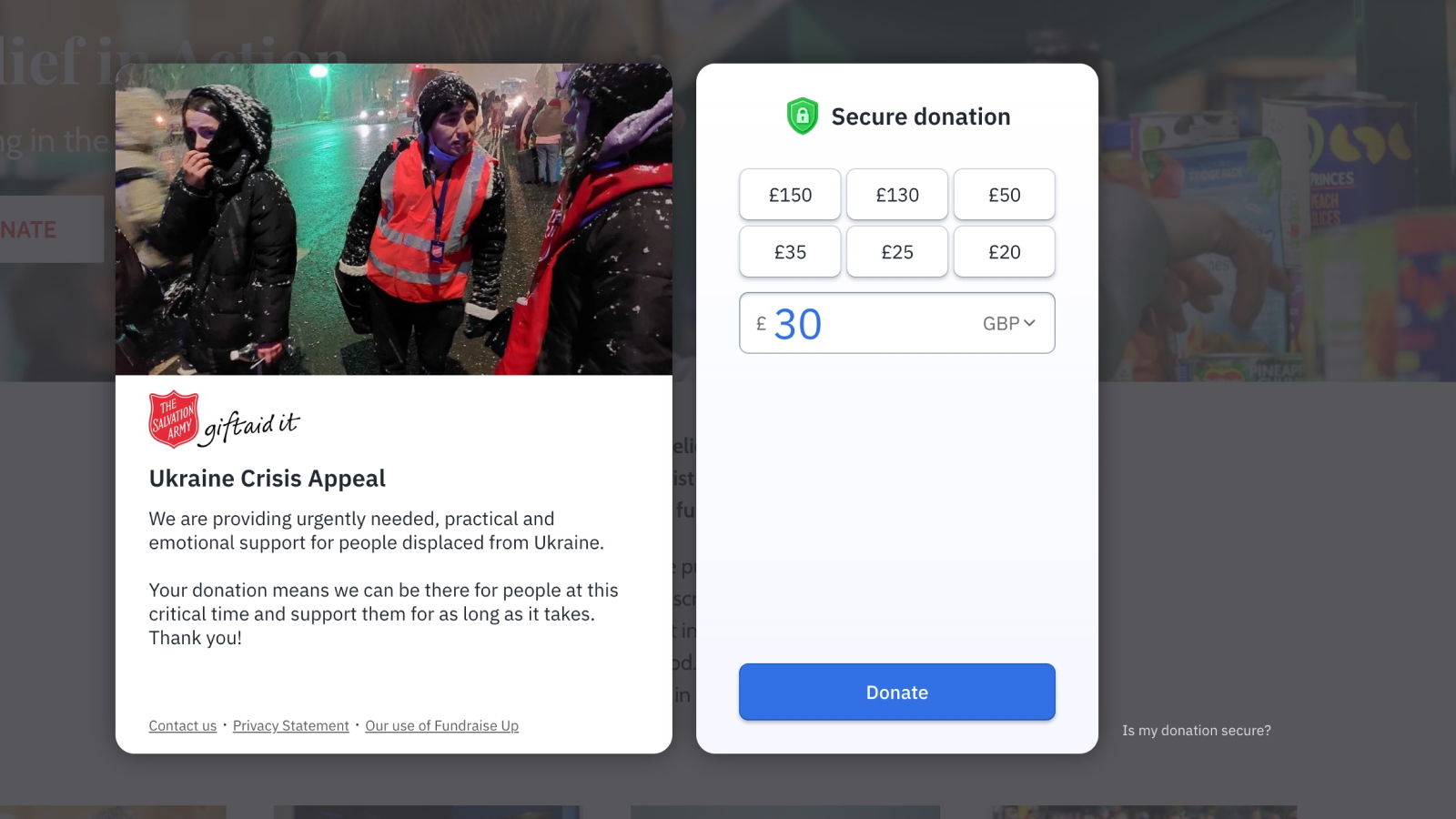 The Salvation Army UK’s Ukraine Crisis Appeal is raising funds to provide practical and emotional support to those who have been displaced by the conflict. To provide emergency services on a global scale such as the Ukraine conflict, the organization combines its fundraising power with a network of 131 Salvation Army organizations around the world, banding together to provide life-saving services for those in desperate need of support. The organization is already seeing a 75% conversion rate for some of the Ukraine-focused campaigns that it is running.

“We're also attracting new donors. In the last week, we've witnessed generosity pour in for the Ukraine appeal, which is phenomenal. Fundraise Up is really benefiting our mission because we can raise more money that enables us to do more projects in the U.K.”

To alleviate the donation processing fees for nonprofits, Fundraise Up has a feature that allows donors to cover the fees so that the nonprofit can get 100% of their intended donation. Because this option isn’t typically offered to donors who are giving to U.K.-based charities, The Salvation Army UK wasn’t sure how the message would resonate with its donors. But it was pleasantly surprised. 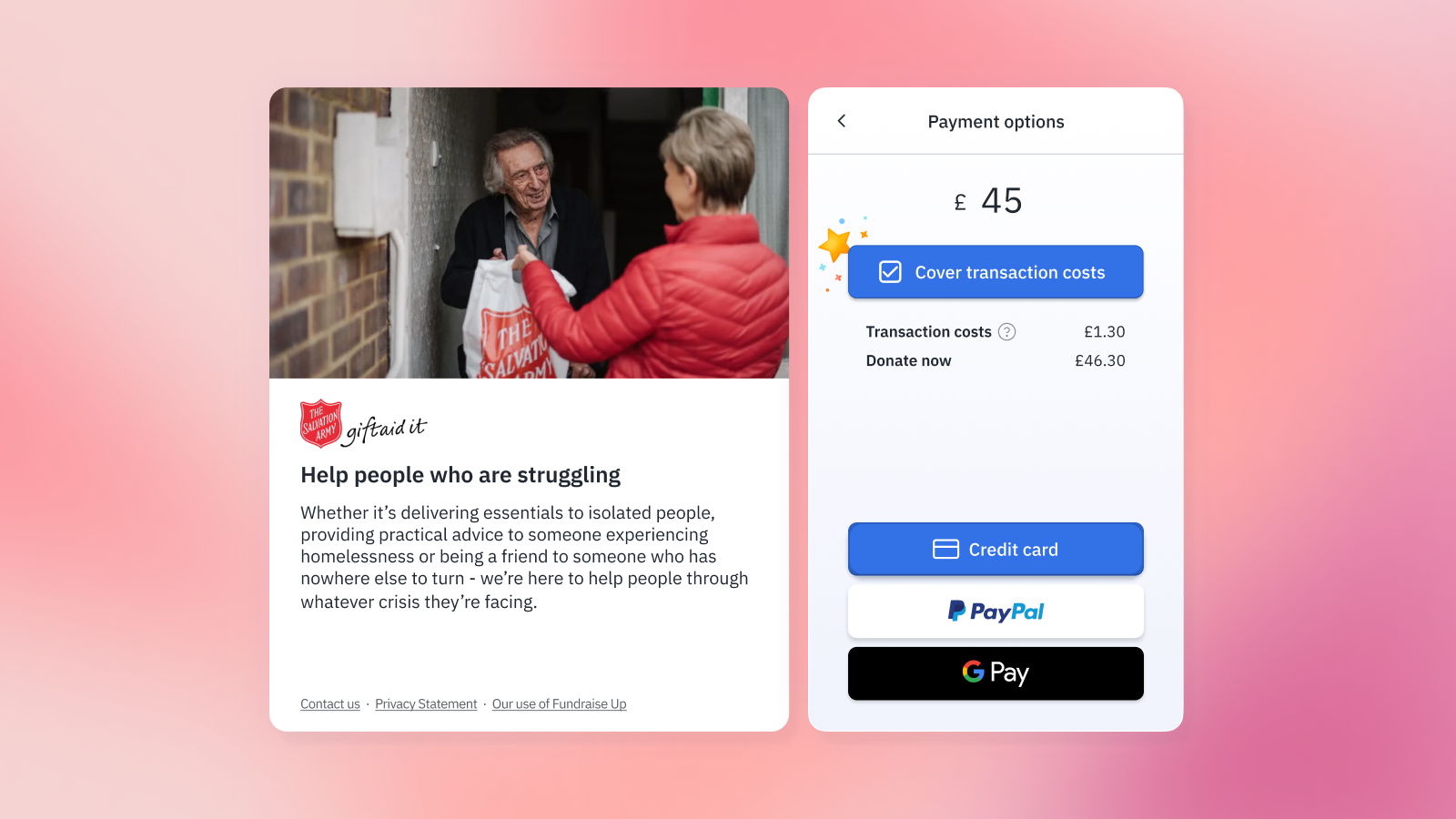 “Actually, 59% of our supporters are covering the fees. We don’t have the transaction cost automatically checked so the donor has to actively opt-in to do that. That’s really exciting to show to our supporters that we’re being transparent about what the fees are and that they’re willing to cover them.”

Elements that cut down on admin time & make donating easier

While The Salvation Army UK chose to move forward with Fundraise Up because of the significant improvement in user experience and increase in donor conversions, one of the surprising benefits it found was the versatile use of Elements. Fundraise Up’s Elements are interactive and customizable components you can place anywhere on your website to engage visitors with an opportunity to donate — like donate buttons, donation levels, donation reminders, and impact sliders. 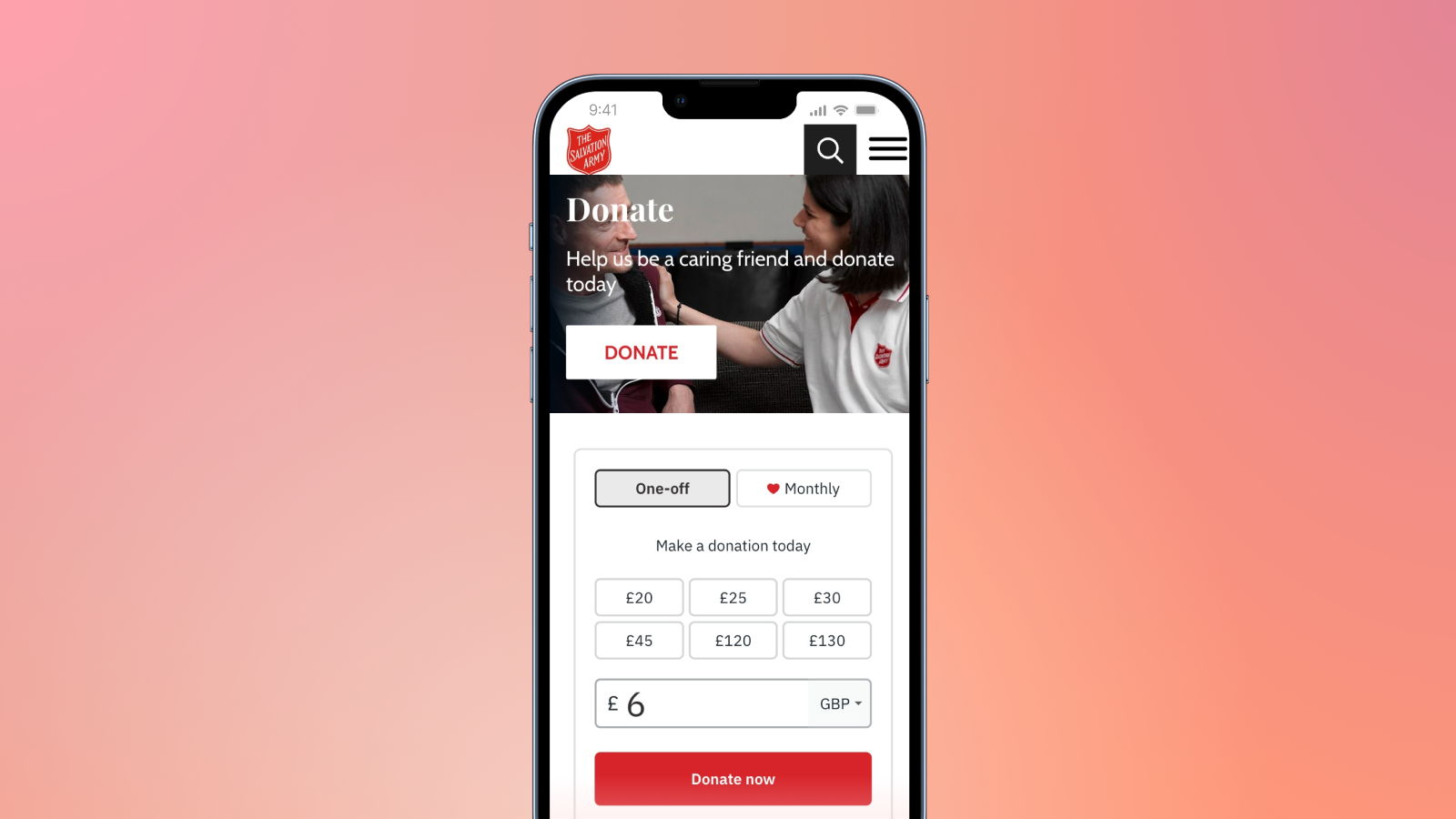 "See, I love the data, so I loved discovering all the testing we can do around Elements to optimise landing pages. It's actually pretty simple to embed on the website. The simplified giving form was one of the most profitable elements in terms of the response we got from donors."

What The Salvation Army found particularly useful was the QR codes. It has since been testing it out in direct mail and with its community supporters and has seen an increase in donations using the QR codes, creating a more seamless donation experience for its supporters and saving its staff time and resources. In addition, QR codes enabled the organization to directly track online donations for its Ukraine efforts, which it was not previously able to do in the past.

“It’s been great to see people using them. Previously, a donor might put cash in an envelope or send a cheque. Now, they can scan a QR code, and that cuts down on the admin time. It takes less staff time needed on the backend because everything works a lot smoother,” Emily explained.

Nonprofits like The Salvation Army UK are leveraging Fundraise Up's AI-powered technology to convert more donors and double fundraising revenue. Are you ready to get started? Book a demo with one of our team members today.